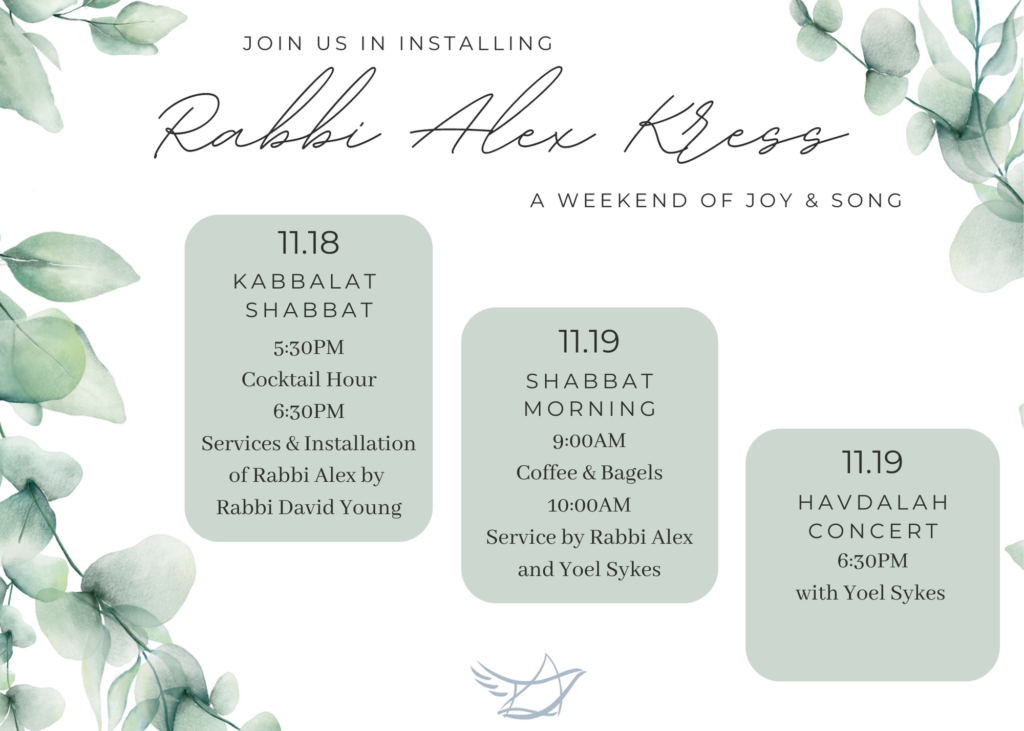 At the beginning of my Torah portion, Vayera, we read the story of Abraham seeing three strangers in the desert. He runs up to greet them in a great show of hospitality. He gives them shade and Sarah bakes a cake for them to eat, and he invites them to rest by his tent. Complete strangers! Then when God tells him that he’s planning to destroy the cities of Sodom and Gomorrah because of the unrighteous people that live there, Abraham begs for them to not be destroyed and makes an offer that if 10 righteous people are found in the cities, they would be saved. Then Sarah and Abraham ventured out to a kingdom. Abraham, afraid the king might kill him for Sarah, because she’s just that beautiful, says that Sarah is his sister. He saves himself by letting the King take Sarah. Eventually, she is returned, but I can’t imagine without significant trauma. Much later when Izack is born and they’re back home, Sarah asks Abraham to send away his other wife and child. Abraham seemingly sends them away into the desert without a second thought. When Izack is grown, God tells Abraham to sacrifice him to show his devotion. So Abraham brings his only son Izaak up the mountain to sacrifice him, but at the last minute, God is like, “never mind it’s all good, don’t sacrifice your son” and Abraham sacrifices a ram instead.

Something that interests me about the stories in my parsha is how the characters all have strengths & flaws. It’s what makes people, people. I’m particularly interested in the Torah’s labeling of people as righteous when not everything they do can be seen as a righteous act. Can someone even be completely good? A quote from genesis reminds me a bit about the situation with Sodom and Gomorrah. Abraham says “The Judge of all the earth must not exercise justice too strictly” which teaches us if God really did judge the world and everyone in it for every single mistake and sin they do, there wouldn’t be any people. God made us all unique and different with all our quirks and flaws and there is no reason that you should try to be anyone different.

Like in the media, you know when people completely change because of peer pressure and what other people want and then they’re not really themselves anymore. Like in my favorite book series, wings of fire, the character moon has to hide she’s a mind reader because she’s afraid everyone will hate her if they knew.  Or even yourself, of which sometimes you cover up for others, and sometimes you do it so much that you can’t even tell who you are anymore. You can’t have a completely perfect world and still have real live humans in it in the same way you can’t have pre-solved puzzles, which are one, pointless, and too boring.

Our Torah presents the flawed nature of our tradition’s patriarchs and matriarchs – even God! At the beginning of the story, Abraham welcomes 3 strangers and gives them food and shade, and a place to rest. But later in the story he’s sending away his other wife and child and sacrificing his son. Sarah is also hospitable to guests but then casts out Hagar and Ishmael to an unknown fate. God also does things that arent always seen as morally correct and was the one to tell Abraham to sacrifice his son in the first place as a silly funny joke, and then carrying out the destruction of entire cities!

If we saw these acts individually – separated from a bigger sense of the story –  we might think a certain way about Abraham or Sarah or God. Like how could you sacrifice your son?! Only a bad person would do that. But he’s also SO hospitable and lovely to strangers. How do we reconcile? Abraham – and really all of us – isn’t made up of his individual acts. He’s all of them – he’s a flawed human, like us, that’s just trying his best.

There’s a story I’d like to share that teaches more about this. Once, the Hasidic rabbi Zusya came to his followers with tears in his eyes. They asked him:”Zusya, what’s the matter? And he told them about his vision; “I learned the question that the angels will one day ask me about my life.” The followers were puzzled.

“Zusya, you are devoted to your religion, you study and don’t brag about your smarts. You have helped so many of us. What question about your life could be so terrifying that you would be frightened to answer it?”

Judaism teaches that we are all created as b’tzelem elohim, in the image of god, yet a lot of us try to be someone we’re not. As humans we compare ourselves a lot to others, looking at other people’s accomplishments and comparing them to our own. No one is perfect and we need to remember that we are our own, unique person just as holy as the next and just as deserving of kindness and respect.