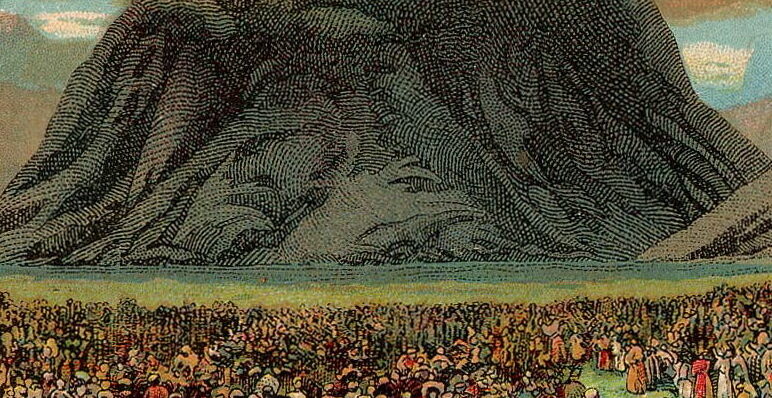 In my Parsha, Ki Tisa, it’s been a few months since the Israelites have escaped Egypt and they’re now at the base of Mt. Sinai.  They have just made a formal agreement with God, known as a covenant, for them to agree to God’s laws in exchange for God’s protection & blessing.  Moses goes up to the top of Mt. Sinai to convene with God.

To the Israelites at the base it seems like Moses has disappeared.  So it’s a time of great confusion.  They’re scared and they’re not sure if they have any leadership and they want to go back to the old gods – so they create a Golden Calf.

Moses sees the Israelites with the golden calf and in a fit of rage smashes the tablets that God has just given him. Then he orders 3000 Israelites to be killed for abandoning God and worshipping an idol. When the idol worshippers are killed, he pleads for God to not kill the rest of the Israelites.

What stood out to me in this story is God’s wrath.  God is mad at the Israelites for making a golden calf, but as Rabbi Huna taught, “It’s as if a parent opened a business for his child on a street filled with evildoers but when the child began acting unethically the parent became angry and threatened to punish them. A friend intervenes and tells the parent: you are as guilty as your child. Did you not place them on a street of evildoers in a place where they could have picked up bad habits? Did you not expect that the environment would have an influence upon them?”

In other words, Rabbi Huna said it is not the Israelites’ fault, it should be God’s fault  because he left them in exile for so long surrounded by people who are polytheistic, that’s what they knew. That’s what everyone around them did so they are the odd ones out. It’s like the kids going into the Willy Wonka factory, with promises of so much delicious candy, but they are expected to behave perfectly or they will meet a “sticky end.”

To me this feels unjust, and even though Moses had 3000 people murdered, I think Moses didn’t have to order the 3000 to be killed.  He could have just exiled them instead of slaughtering them. What this makes me think about is rage.

One example of rage that I saw was one time when me and my friend were walking his dog and saw a guy spray painting a fence around a house under construction.  Somebody on the inside innocently pushed out the fence and it accidentally hit the guy in the face. In a fit of rage he pulled out a gun on the contractor. We quickly ran away and called the police, but it was a pretty scary thing to witness.

I also see rage in politics from things like the January 6 insurrection, where rage fueled a violent breaching of the Capitol and killed multiple people. So rage is a dangerous emotion that we should all work on.

In this parsha, the Israelites lost faith and were punished harshly by Moses and almost by God. What I have learned from God and Moses is that we all have rage – even God. We all over react, and even if we feel full on justified we should take the time to really think before we do, especially when it comes to anger. If we can do this then there would be a lot more peace in the world.