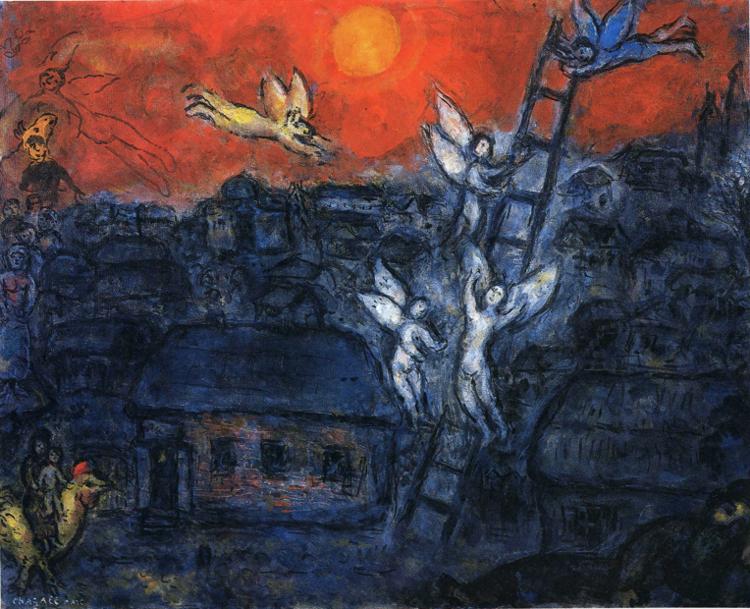 This morning I am going to be reading from Parshat Vayetzei. In this Parsha, Jacob leaves Beer Sheva and goes toward Harran. Jacob falls asleep on a rock and has a dream about angels going up and down a ladder that was going up into the sky. In the dream, he sees God standing beside him. When Jacob wakes up, he says “Surely God is present in this place, and I did not know it!”

As I first read this story I thought of a dream I had many years ago about my Grandmother who passed away before I was born. I didn’t  know exactly what she looked like or  what her personality was like, so I found it odd that I had this dream. When I woke up I went to my Mom and told her about the dream. As it turns out, she had a dream about her that night too. This was crazy to me because it felt like she visited us in the middle of the night. Like Jacob’s dream of the angels, my Grandmother was the angel in my dream.

But, I realized Jacob’s dream had even more meaning the more I studied. One commentary teaches that, “A person’s improvement in his personal qualities resembles a ladder…Their head must reach to the heavens, in that he must always strive to ascend higher and higher.

And if in their quest to improve themself they find unexpected obstacles and that they have fallen down somewhat, they should not be afraid, because that is to be expected.” (-R’ AVRAHAM ZALMAN, Torah Gems Volume I pg. 228)

My parsha has helped me understand what it means to become a Bar Mitzvah. For one, it’s about learning from those who came before us, especially our family, and honoring them in the way we act in the world. It’s also a lesson in priorities. What is important to me as I become a Bar Mitzvah isn’t to be perfect, but to try to do better every day, focused on the things that matter: my family, my friends, having a roof over my head, food to eat, and doing my best in everything I do.

My Grandfather, Abraham was born in Iran (also known as Persia) at a time when Jews were frowned upon and were forced to live in ghettos, which were enclosed Jewish neighborhoods. He had to go to an all Jewish school since they were not allowed to be mixed with Muslims at that time. However, my Grandfather was very intelligent. When he turned 18, he got accepted to be able to move to America as a foreign exchange student, where he didn’t know anyone, except one Uncle in New York. He could hardly speak English at the time.

He spent 6 months in a school learning how to speak English and then went to a university to become a civil and structural engineer. My grandfather was just trying to survive, doing his best and focusing on what matters. After he established himself in America, he was able to sponsor most of his family and help them come to America too. Today we have a family in America that is now over 1,000 people. One time I was at a Persian restaurant with my Grandma and Grandpa, and every time someone walked in, they got up and hugged them. We all come across unexpected obstacles in life and there will be lots of bumps along the road, but you have to keep pushing through – it will be worth it.

In the Torah, the Israelites never reached the promised land of milk and honey. Every year we read from creation until the Israelites are on the verge of the promised land and then start over. The Torah is a story of wandering and growing and learning every step of the way, through obstacles, challenges, failures, and sin. The Torah says keep going because life is a blessing. Like Jacob’s ladder, we should always strive to ascend as far as we can, but not focus on perfection. We must try to be our best selves every day and count our blessings.