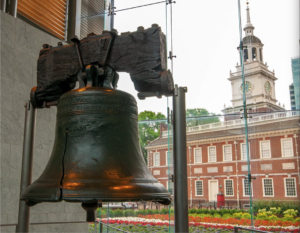 Growing up in Philadelphia made me feel close to history. If you’ve ever visited the Old City – or seen the movie National Treasure – you’ve seen the *riveting* Liberty Bell, inscribed with the words of Leviticus. Across the street, where the bell once rang, is Independence Hall – the site where the Declaration of Independence and the Constitution were drafted. There’s the reconstructed foundation of The President’s House where George Washington & John Adams lived when Philadelphia was the nation’s capital, and Elfreth’s Alley, one of the oldest continually lived on residential streets in America adorned with cobblestone and all. Philadelphia is even home to the oldest, continually operating synagogue, Mikveh Israel, which has been active since 1740.

But living in Philadelphia also means your life sometimes coincides with history. My mom’s family celebrated Christmas and so, we too celebrated at my grandmother’s in New Jersey. Every Christmas evening, on our way home from the festivites, we’d cross the Delaware River and some years as we did I thought about how George Washington had turned the tide of the Revolutionary War by doing the same on the same day in 1776. Some years as we crossed, I thought – yikes, this weather is atrocious. I cannot imagine being in a little ferry crossing the ice-choked waters of the Delaware. Some years as we crossed, I thought – Washington would’ve loved this 65-degree Christmas.

Washington’s Crossing of the Delaware River was an important turning point in the Revolutionary war. In November of 1776, the Continental Army didn’t have much of an army left. They were soundly defeated in New York and limping their way south through New Jersey. More New York and New Jersey colonists were signing up for the British army than George Washington’s. The remaining troops were exhausted, demoralized, and low on resources.

Luckily for Washington, one gentlemanly custom of 18th-century warfare was a solid Winter Break (much longer than UCLA’s); the armies did not fight during winter. This opened up an opportunity for Washington to plan a surprise attack, the first time in the war that the continental army went on the offensive. The first step in Washington’s meticulously planned attack was for four units to cross the Delaware River and attack Trenton on December 25th, 1776.

A frigid storm that evening made the journey particularly perilous; only one unit succeeded in crossing the icy river as freezing rain pummeled the soldiers. Once across, Washington’s troops surprised the Hessian soldiers fighting for the British and quickly overtook the city. A few weeks later, Washington did the same in Princeton. These victories began to change the tide of the war, and they started with Washington’s bold move to cross the river.

Rivers in general, but in American History, particularly the Delaware River, provide a powerful metaphor for liminal space & for transition; for opportunity & for danger; for forward movement & for the unpredictable, uncontrollable unraveling of life. Rabbi Alan Lew teaches that, “Rivers only run one way. The home we leave to begin [our] journey [through life] is necessarily a different place than the home we arrive at in the end.” 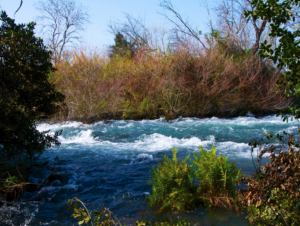 Our patriarch Avraham, the midrash teaches, gained the nickname Avram Ha-Ivri – the one who crossed the river. His biblical journey begins when God tells him, “Lech L’cha!” Go forth – or more literally – go to yourself. Leave this place, God tells Avram, so that you might find yourself, your destiny. Leave your father’s home and set out.  Cross the Euphrates river away from here to a land and a future that I will show you across another river, the Jordan river. But Avram Ha-Ivri & Sarai are not the only patriarch & matriarch to meaningfully cross a river in the Torah.

When Jacob flees his home after stealing Esau’s birthright and blessing, he heads to Haran and leaves across the Jordan river. Like his grandfather, he journeys away from home to mature and discover. After twenty years away, he returns a different person. No longer is Jacob the meek, conniving, domestic, indoor kid. Now Jacob has journeyed hundreds of miles, wrestled with the divine and acquired a new name, Israel. He’s been married and had children. He’s acquired herds and wealth and aged. As he returns homeward, standing again at the Jordan, he notes the transformation:

“With my staff alone I crossed this Jordan, and now I have become two camps.

Rabbi Ayala Miron teaches that, “Before crossing back, [Jacob had] to go through three confrontations: with his deceiving uncle and father-in-law [Laban], with his deceived brother Esau and with the angel of God, or [perhaps] with his higher self. She says then, that, “Crossing the river means leaping into a new stage in Jacob’s spiritual life: leaving his evasive nature to develop the courage to confront – to stand face to face against danger, against injustice, against his innermost feelings. It means becoming Yisra’el- the one who struggles- rather than Ya’akov, the follower. Crossing the Jordan thus represents transformation.”

A little over a year ago I found myself sitting alongside the other Philadelphia river, the one outsiders have a hard time pronouncing: the Schuylkill. Like others before me, I was in liminal space – amidst a transition – my life on the verge of massive transformation- and somehow, unintentionally, I had landed at a river. As the world shut down in March 2020, a cancer diagnosis rocked my world. The experience uncovered needs I didn’t know I had and changed my priorities overnight. In the same period, my experience of Judaism in our world was upended and reshaped into something new. And divorce loomed. Everything in my life seemed controlled, predictable, rosy – until it wasn’t.

Two years, four surgeries, a global pandemic, and a divorce later – my journey through life is much different than I could’ve ever anticipated. I am so different physically, mentally, and spiritually than I could’ve ever anticipated. I’ve failed in ways I never thought I would and loved in ways I never thought I could. I’ve reached heights I yearned for and lows I that seemed inescapable. Life, it seems, runs much more like a winding river than the straight line Hollywood suggests, our one-way path chiseling the landscape beneath our feet.

For some of us, Abraham’s path rings true. We were spared trauma in adolescence but crossed rivers in adulthood. After Abraham leaves home at 75, he experiences famine, marital strife, the birth of his son Ishmael with Hagar and their exile, the birth of Isaac with Sarah and the trauma of his near sacrifice.

For some of us, Jacob is a more appropriate fit. We crossed rivers early in life, persevered through adversity in adolescence. Once Jacob leaves home at 17, he dreams of a ladder to the heavens and has a religious revelation. He is deceived repeatedly and saddled with the consequences. He is married twice and has thirteen children in seven years. He wrestles with God, himself, and his faith, an experience so pivotal that he changes his name to “the one that wrestles with God” – Israel.

The rivers we cross – whether shallow or deep, raging or trickling, anticipated or unexpected, literal or figurative – offer a powerful lesson for all of us trying to traverse the terrain of our lives.

How many of us have had our lives radically changed in the past year or two or five? OK, perhaps the better question is, who has NOT? Who has welcomed new life into the family? Who has lost a parent or sibling or friend? Who has been married or divorced? Who has been diagnosed with illness,hospitalized, or cured? Who has lost their job or financial resources or come into wealth and stability? Who has escaped a challenged relationship or found their bashert?

The river Jordan, our Talmud tells us, originates in Gan Eden – the garden of Eden, in paradise – and “tracks its endpoint to the time of redemption.” Somewhere between those points, then – perhaps at a particular river crossing – is revelation. Theologian Martin Buber teaches that, “Creation is the origin, redemption the goal. But revelation is not a fixed, dated point poised between the two. The revelation at Sinai is not this midpoint itself, but the perceiving of it, and such perception is possible at any time.”

Perhaps on the shores of the Delaware George Washington had a revelation “that the entire movement for American independence was on the verge of extinction” and he needed bold action. Perhaps crossing the river was the first act towards the redemption of the American dream. Perhaps Avram’s revelation in which God told him “Lech L’cha” was made real when he crossed the Euphrates river of his home and set the entire Jewish people on the path towards their future, towards a new home across a new river. Perhaps Jacob’s revelation had to happen after he crossed the Jordan a first time, and perhaps his personal redemption had to happen after he returned 20 years later to cross again. Or perhaps, the physical act of crossing a river in our narratives as Americans and Jews simply serves to mark the moments we move towards our destiny – towards our becoming – towards redemption. And we leave the previous chapters behind.

“It is said that before entering the sea a river trembles with fear,” Poet Khalil Gibran writes in his poem Fear.

“She looks back at the path she has traveled,

from the peaks of the mountains,

And in front of her, she sees an ocean so vast,

that to enter there seems nothing more than to disappear forever

but there is no other way.

The river can not go back.

Nobody can go back.

To go back is impossible in existence.

The river needs to take the risk of entering the ocean because only then will fear disappear,

because that’s where the river will know it’s not about disappearing into the ocean,

but of becoming the ocean.”

We must not fear becoming…growing…changing…evolving. For we are but sticks in a stream, borne along by a current we cannot impede. Sometimes becoming means we must leave the comfort of home to find a new home.  Sometimes growing means we might hurt others and get hurt along the way. Sometimes changing means we can no longer live up to promises we once made and must chart a new path. Sometimes evolving means we must adapt after failure and learn a new way forward. In other words, sometimes – perhaps often – we’re human.

The Yamim Noraim – the Days of Awe – provide us with a moment to confront that humanness, that fallibility. We pause every year at this time to do cheshbon hanefesh – to do an honest accounting of our soul – and acknowledge where we were human, where we weren’t our best selves, where we failed. This afternoon, Jewish communities like ours will perform the ritual of Tashlich, casting our sins into the water and marking the transition to the new year. Most congregations meet at a creek, or a river – and don’t have the privilege of the Pacific outside our front door.

But whether we stand physically or spiritually on the riverbank of the year to come, we seek revelation from God, our tradition, and ourselves in order to cross the river towards redemption. As we move into a New Year, may we approach the crossings to come with humility and openness. May we embrace change and evolution in 5783. And may we take steps, together, toward who we becoming in the year ahead.

In This House, We Believe - Erev Rosh Hashanah Sermon 5783

In This House, We Believe – Erev Rosh Hashanah Sermon 5783